Gordon Stott is one of the UK’s most exciting and talented young chefs. Multi-award-winning, inventive and fanatical about food; Gordon has built a reputation as one of the industry’s rising stars.

A graduate of Tante Marie Culinary Academy, Gordon gained his first experience in top kitchens at the 2 Michelin star Vineyard at Stockcross and The Carnarvon Arms near Newbury. In 2010, he joined The Sun Inn in Dummer, Hampshire, as sous chef and 18 months later took over as landlord and head chef at the age of 20. Six years under his leadership, the popular gastropub increased profits by 320%, received multiple accolades and extensive media coverage in print, online and broadcast.

Less than six months after opening, The Purefoy Arms was awarded ‘Gastropub of the Year’ at the Food Awards England 2018. Rave reviews have also appeared in the Daily Telegraph, Olive Magazine, Town & Country, The Sun on Sunday’s Fabulous Magazine, Hampshire Living and more. 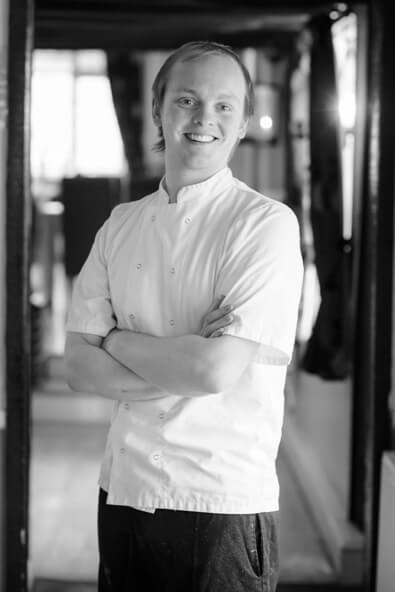 Gastro Pub of England in the Food Awards England 2018
(Winner).

Inspiring a new generation of chefs

As one of the UK’s youngest landlords and head chefs, Gordon Stott has become a figurehead for aspiring talent in the hospitality industry. He has mentored students and college leavers and hosted a Masterchef-style competition for the last few years. Gordon continues to inspire a new generation of chefs. He regularly speaks and demos at events and is involved with mentoring programmes.